“Observing the 50th Earth Day under the COVID-19 lockdown was less of a celebration and more of a chance for reflection. Instead of rallies or parades, there were virtual discussions like the one hosted on Zoom and Facebook Live by the presiding bishop’s office and Washington National Cathedral as part of its ‘Honest to God’ web series. Moderated by the Rev. Canon Stephanie Spellers, the panel discussion drew connections…”

A Green Solution to an Aging Stormwater System

“Climate change means more floods, which overwhelm urban sewers and send raw sewage into rivers and streams. Philadelphia is aiming to capture rainwater before it flows into city drains.”

“At least it doesn’t smell today,” she said, crediting the chilly air. 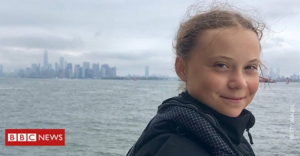 Greta Thunberg, the Swedish schoolgirl who inspired a global movement to fight climate change, has been named Time magazine’s Person of the Year for 2019.

“The 16-year-old is the youngest person to be chosen by the magazine in a tradition that started in 1927.

“Speaking at a UN climate change summit in Madrid before the announcement, she urged world leaders to stop using “creative PR” to avoid real action.

“‘The next decade would define the planet’s future,’ she said.

“Last year, the teenager started an environmental strike by missing lessons most Fridays to protest outside the Swedish parliament building. It sparked a worldwide movement that became popular with the hashtag #FridaysForFuture.”