by Dr. Bernadette Roche, The Church of the Transfiguration, Braddock Heights

Earth Day began in the U. S. in 1970 as a day to celebrate the planet and encourage people to be more environmentally friendly; pro-active even. It is now an annual event, and is widely regarded as the beginning of the modern environmental movement. It is held each year on April 22nd. Activities associated with the day often include planting trees, raising awareness about recycling and composting, volunteering for blue-green projects, and reducing the amount of energy people consume. Earth Day is supported by a host of individuals, families, faith communities and companies and governments around the world, but is largely ignored, if not dismissed, by the current Administration.

Look no further than the Bible or the Book of Common Prayer, and you will find a clarion call for reverence for God’s creation on earth, not for one day a year, but for every day. The psalms are full of inspiration and reflection on the healing power of nature for mind, body and spirit. The first book of the bible, Genesis, outlines our role as stewards of the earth. The prayer for the conservation of natural resources in the Book of Common Prayer says, “Give us wisdom and reverence so to use the resources of nature, than no one may suffer from our abuse of them, and that generations to come may continue to praise you for your bounty; through Jesus Christ our Lord.” This could be called “the sustainability prayer”, in that the definition of sustainability is to make sure future generations do not suffer from excesses of today. 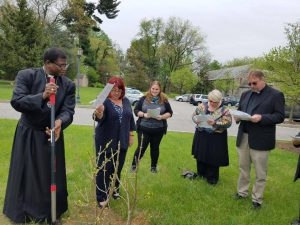 So, let’s celebrate the earth every day, with a thankful heart of all that is given to us, and let’s celebrate on Earth Day to share with the world that we as Christians take creation care seriously. Earth Day coincides with the Easter season: a time of renewal and hope. What actions can you take to promote nature? Many farmers markets are having their opening weekends in the mid-Atlantic by Earth Day, and others are not far behind: you could support your local farmers and buy locally grown produce. It’s now the perfect time for planting gardens – even a window-box garden can support beautiful flowers or culinary herbs. It can be a time to join forces with your watershed associations and make your own rain barrel or paint storm drains with reminders of where the water is headed. Taking a hike at a city, state, or national park with your kids is a brilliant way to celebrate the earth. Perhaps survey your congregation and see if there is any place you could plant a tree on church grounds: and get a tree from the Lutheran/Episcopal partnership for planting trees in celebration of 500 years of the Reformation. Whatever you do, start your earth year celebration on Earth Day, and perhaps you will develop of a habit of making every day earth day.

Climate Change: Already In A Neighborhood Near You

A Green Energy Guide for Homeowners and Churches
Scroll to top