Green change at the Episcopal Church of the Holy Covenant started with Bernadine Coates. Working with Interfaith Partners for the Chesapeake (IPC), she connected with Blue Water Baltimore which conducted a water audit, and guided church leadership through the process of implementing stormwater management projects on its grounds. 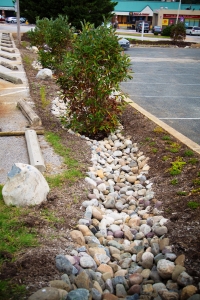 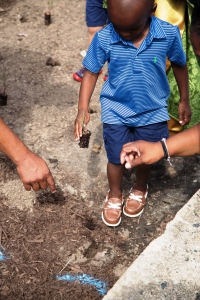 In January of 2017, the Baltimore City Department of Public Works Watershed Liaison representative, a rep of Blue Water Baltimore and several parishioners determined there was no land on which Memorial could add even a single tree for environmental stewardship.

But, that late spring, an application for sidewalk tree pit expansions for bigger, healthier trees, related costs and a new bicycle rack was made to BGE Green Grants. The award notice came in July whereupon a co-lead of Memorial’s Creation Care Team reached out to one of the neighborhood Title 1 public schools to initiate what came to be called the Memorial Episcopal Tree Pit Expansion Outdoor Environmental Education Event.  Before the end of their summer vacations, teachers from the two other neighborhood schools were enjoined to participate in the program. All teachers agreed to associated environmental instruction before the date.  BGE was later asked if it would deploy a bucket truck in support of the event.

On the morning of Friday, October 6, a BGE bucket truck crew arrived and parked curbside. About an hour later, 30+ students and their teachers from the 3 schools arrived. The group from Mount Royal was led from the school, by Memorial’s rector, the Rev. Grey Maggiano whose daughter is a student there. The students were divided into teams of 3 or 4 per tree pit.  Beside the teachers, Creation Care Team members and Rev. Maggiano rector were arrayed around for action.

All hands, including those of the bucket truck crew, worked to recondition the expanded tree pits with composted soil, top soil and mulch.  A great deal of excitement was created when the students saw there were two dozen earthworms to add for cultivating the tree pits soil. They then planted liriope spicata, a hearty perennial grass. Afterwards, two nearby storm drains were stenciled to make a further point about healthy trees and stormwater mitigation.

Linked here is a homemade movie of the event. 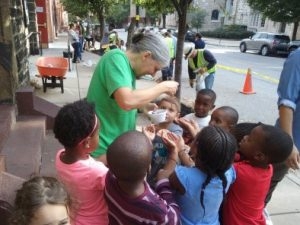 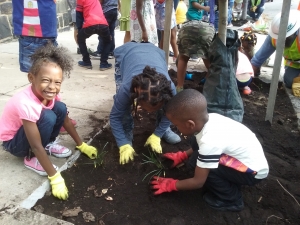 A new Formation building at St. Margaret’s, attached to the 1970 Parish House, was finished in late summer of 2015, just in time for fall occupancy by the Day School.  It sports an atrium foyer with casual seating, a good-sized Fellowship Hall and Sunday School classrooms on the upper level, and a preschool through Kindergarten Day School on the ground level.  The Day School is a Certified Maryland Green School by the Maryland Association for Environmental & Outdoor Education (www.maeoe.org).

The entry foyer has a large skylight that adds natural illumination to that provided by the glassed entry facade and, what’s more, additional daylighting comes from the immediately accessible stairwell.

All mechanical and plumbing systems meet LEED standards as promulgated by U.S. Green Building Council under its 2009 rating version.  The HVAC system is a high-performance Daikin system that includes particulate filters in each of the units.  Lighting throughout automatically dims if natural illumination is sufficient to provide energy saving.

Furnishings throughout are made from low VOC materials and include salvaged materials.  For example, the foyer tables were made by a parishioner from a tree that had to be taken down to clear the site for new, 2-story construction. Only green cleaning products are used.

In January 2016, the project was certified LEED© Silver.  After project certification, an array of photovoltaic solar panels was added to the roof of the building.

At about the same time the Formation building was being constructed, a culvert was installed under the sidewalk leading to the church, providing relief to the occasional stormwater flooding condition in the adjacent parking area.  On the other side of the culvert, a bioswale and rain garden were constructed to abate the stormwater.

At the east and north walls of the Day School, a series of rain barrels collect rainwater for irrigation during periods of infrequent rainfall in summer.  From some of the water barrels, the harvested rainwater is used to water the Day School garden used for STEM-based environmental education.

The Day School also maintains a composter and composts all of its food waste.  A student in each class is given the responsibility of composting the uneaten food from their classmates.  These youngstudents are learning first-hand about the necessity of Creation Care and its benefits. 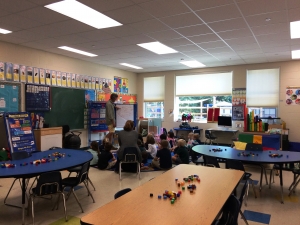 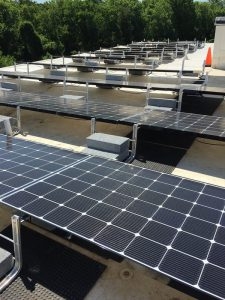 On the property of St Paul’s there sits a rain garden. IT is part of the Clean Howard project to help stem the fastest growing source of pollution that runs off into the Chesapeake Bay. This rain garden, built by county youth in the READY program, acts like a native forest by collecting, absorbing, and filtering the storm water coming off roofs, driveways, sidewalks, and patios. Compared to a conventional lawn, rain gardens reduce runoff by allowing 30% more water to soak into the ground. The garden protects the waterways by removing almost 90% of the nutrients and chemicals, and 80% of the sediment carried by storm water runoff. 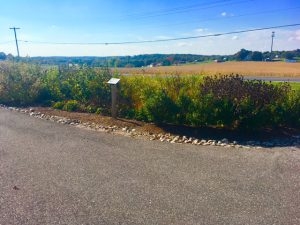 The Church of the Redeemer, Baltimore City

On a warm and sunny Sunday in October of 2013, parishioners of all ages at The Church of the Redeemer planted a small orchard of six trees (three apple and three pear) on the church grounds. The three pear trees succumbed to a rough winter in 2014, but the three apple trees are thriving, cared for primarily by our young friends in the Parish Day School, and will likely begin bearing fruit next year.

Growing fruit trees takes commitment and some work, but it is worth the effort. Redeemer’s decision to join the effort came after Rabbi Nina Beth Cardin, who founded the Baltimore Orchard Project, spoke to the congregation noting that with over 120,000 people hungry in Baltimore City and 110,000 in Baltimore County, churches can play a role by planting local orchards that will provide welcome, healthy, free food to augment daily diets and create healthy eating habits for those in need.

“The Baltimore Orchard Project is a great partner for Redeemer in a number of ways.” Said Mary DeKuyper, senior warden. “It strengthened the intent and purpose of our Generations Campaign, the centerpiece of which our new geothermal heating and cooling system. The care and sustenance of a small fruit orchard as an inter-generational activity for the parish and a legacy to the community is another response to our call to be good stewards of creation. And we are particularly aware of its relevance to the resolution to focus on those living in poverty.”

The Baltimore Orchard Project, now a part of Civic Works, has helped over 100 planting partners create small orchards that create greener, healthier and more resilient communities and provide urban-grown fruit to neighbors in need. They are always looking for new partners (baltimoreorchardproject.civicworks.com). 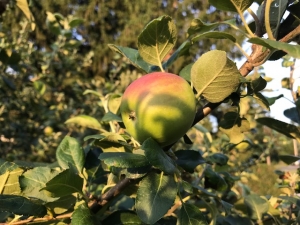 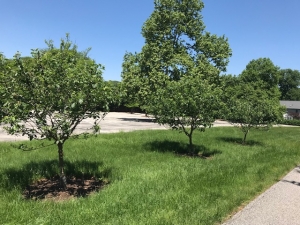 During the 90-day Maryland Legislative session each year the Episcopal Diocese of Maryland holds its Episcopal Advocacy Day in February. That afternoon this year, Bishop Sutton introduced GreenGrace Co-lead Dick Williams to the Diocesan Comm Team, telling us he’d “love” to have a video for the Convention on one of his biggest environmental concerns, the ubiquitous single-use disposable water bottle. 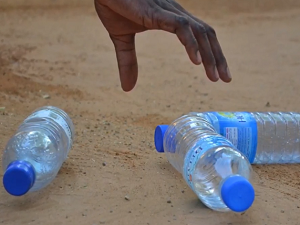 The purpose of IPC’s One Water Partnership is to encourage, support and equip local congregations with the skills and resources needed as they embark on a path of environmental stewardship and inspire others to heed the call to care for our natural world.

Of the original 16 One Water/Jones Falls Congregations (three synagogues and 13 churches) covenanting in October of 2017 to undertake six environmental actions or more, the Diocese of Maryland churches are:

The 16 congregations were awarded $1,000 each to help execute their covenanted actions, and future environmental projects.

Other Episcopal churches committing at the same time one action or more were Church of the Nativity and St. David’s Episcopal Church.

Since then, IPC has received grant funding to extend its One Water Partnership outreach into the Harford and Frederick County faith communities.  And, IPC new funding includes additional grant monies for the original 16 congregations which show additional environmental projects undertaken since completing the original covenanted actions or in planning for nearer term execution.

IPC mission includes supporting our Diocesan churches in obtaining grants and helping identify potential greening projects and other initiatives in your Maryland watershed.  To make contact, please go to its website and look for staff person Bonnie Sorak, Outreach Coordinator. 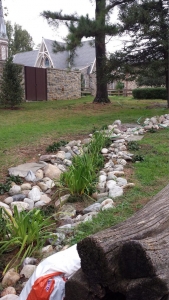 Originally called 10,000 Trees when this project was begun in 2013, Trees for Sacred Places engages houses of worship across Maryland to help increase forest stream buffers and urban tree Canopies. Over the past two years, 45 congregations and schools have participated in this project which also provides opportunities to educate a large and diverse regional group of Chesapeake Bay residents in the restoration process of the Chesapeake watershed. Through Trees for Sacred Places, each congregation receives free trees for planting as well as two workshops, one on the importance of native trees to the environment and one on the sacred importance of trees.

The congregations in the Diocese of Maryland which have participated in this program are: 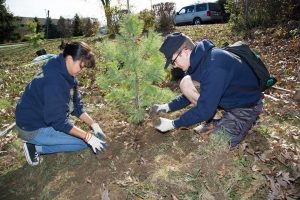