The idea grew out of fear.

The fear was that the Chesapeake Bay Trust would decline the Mt. Royal PTO’s 2017 Watershed Assistance Grant request for $75,000 for a major de-pave and greening of the Mount Royal Elementary/ Middle Schoolyard in Baltimore’s Bolton Hill neighborhood.

At stake was the momentum that began building in the summer of 2017 with stakeholder formation meetings—community members and organizations, institutions and other non-profits, parents, teachers and school principal—for major schoolyard changes.

The seeds of a new greening idea (no depave) arose from two visits within 3 weeks’ time to the beautiful Ladew Topiary Gardens and its regionally regarded Butterfly House in Monkton.

After the second visit, I put in a call for Ladew’s outreach coordinator—whoever that might be. Happily, Rachelle Fowler called back. I gave her an elevator speech about a Pollinator Micro-Habitat/Outdoor Classroom for Mount Royal; the Pollinator Garden for short. 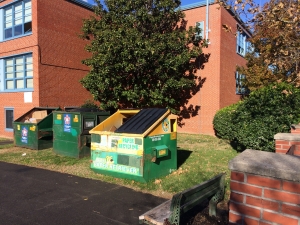 Thus began a special relationship with Ladew for the Title 1 public school that would include in-classroom instruction and Garden planting design by Rachelle, and 2nd and 3rd grade visits to Ladew, all paid for by grant funds obtained by Ladew staff. 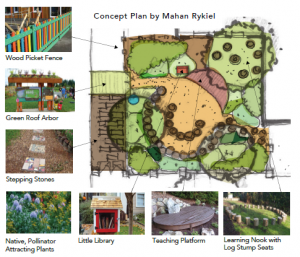 In late November, a MICA professor who led an architectural ceramics tour of historic Bolton Hill in the summer of 2016, agreed that he and two assistants would guide a dozen Mount Royal 2nd graders in designing and kiln-firing ceramic stepping stones for the garden.

In late April 2018 the Chesapeake Bay Trust awarded the project $5,000 under its Environmental Education Mini-Grant program. Turns out that was about 50% of what was needed. Four other funding sources were identified, including the Bolton Hill Garden Club.

Before the grant award notice was received, two actions were taken. First , the “Sheet Mulching Event,” was to supress the regrowth of the grass monoculture at the site.

The other was ordering the first 3” layer of mulch for deliver in April. “O ye, of little faith…” kept arising in my mind. A week later the site prep was completed by adding a 3 in. layer of tanbark mulch as the permanent garden surface.  These actions addressed “O ye, of little faith” that kept arising in my mind. Construction began in May 2018 where the handiwork of school parents, the Memorial Episcopal Creation Care Co-lead  and a “ringer” from Hamilton E/MS who had built its two gardens was on full display.  Up went the posts to support the vine arbor, and those to support the fencing which school art students primed. The project was dedicated in a school-wide ceremony in mid-November.  Work continued, including opening the protected lane for foot traffic in March 2019. Art with a Heart stepped in at about the same time to help the students design the images for the fence and transfer them onto the fence with paint and brushes.

The educational objectives for Mount Royal students are geared to STEM learning about the biodiversity, the support offered by a micro-habitat for pollinators and other wildlife in watershed restoration, not to mention a healthier cityscape. The partners of this Mt. Royal PTO pollinator/garden classroom project who have helped allay our fears are , Mahan Rykiel Landscape Architects, MICA, the Creation Care Team of Memorial Episcopal Church, DW-GREEN Associates, my green infrastructure consulting firm, Art with a Heart and the Chesapeake Bay Trust which sells Bay license plates to support its grant-making programs.

OBTW, the CBT WAG request was declined which, as it turns out, was an acceptable outcome for those who hoped on-site parking for staff and others would be maintained. Climate Change: Already In A Neighborhood Near You
Scroll to top