Climate Change: Already In A Neighborhood Near You

Climate change is real.  Despite widespread confusion across the US population, 99% of scientists now agree that human-caused climate change is a reality.  Scientifically speaking, there is just no doubt.  We can see the signs of climate change in many independent processes– to name a few, the sea level is rising, average temperatures are 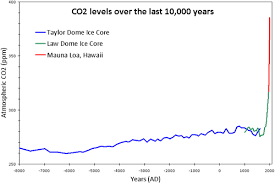 increasing, 9 of the 10 hottest years since 1884 have been since 2000, the CO2 concentration in the atmosphere (which for 800,000 years before the present never exceeded 300 ppm) is now 409 ppm, glaciers are shrinking etc.  You can see the whole array of evidence that climate change is occurring here.  Even if you choose to disbelieve the science, it seems unlikely that any hoax could result in the simultaneous changes in so many of Earth’s processes.

There is no scientific controversy, and no need for additional facts or discussions.  This issue is settled.  We know what is happening, and what will occur in the future if we don’t do anything to stop it.  We know what to do and the technologies are available.  The economic consequences of inaction are severe, and it is now cheaper to solve the problem than to ignore it.

Why is climate change occurring?  Carbon dioxide and other “greenhouse gases” (water vapor, methane, nitrous oxide) slow the loss of heat from Earth.  So, the more or less constant input of heat from the Sun is not leaving the atmosphere fast enough for the temperature to remain in balance, so the air is warming up.  Easy!  You can see the increasing temperature trend for yourself in this NASA animation of global temperatures since temperature records began in 1884.  Don’t worry about the fact that temperatures can vary a lot in a single location—the trend is clear.  But the story doesn’t end with increasing air temperature.  Over 90% of the increased temperature and a lot of the extra CO2 have been absorbed by the world’s oceans, which have been gradually warming up and becoming more acidic (CO2 becomes carbonic acid in water).

Warmer oceans cause more evaporation, and the warmer air holds more of this water.  The air is now about 5% more 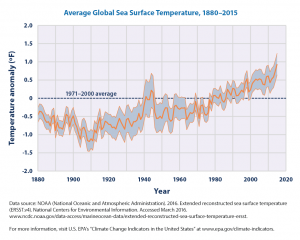 humid than it was in the 1880’s.  So what?  That doesn’t seem like much—until you consider that tropical storms gain energy from a warm ocean.  The winds from Hurricane Sandy circulated all the way out to Michigan, gathering water over the entire Eastern part of the country.  In that setting, 5% more water vapor in the air can make a big difference.  Climate change is a recipe for severe and highly variable weather, increasing the frequency of storms like derechos and causing false springs, like the one we had due to this year’s freakishly warm February.  Maryland farmers largely escaped the devastating impacts of the subsequent freeze, but farmers further south had serious crop damage.  Don’t look for Georgia peaches in the store this summer.

Climate change affects almost everything.  Increased temperatures and shorter winters mean that snowpack in areas depending on meltwater is much more limited than in the past.  This was a primary cause of the 5+ year drought in CA.  The fire season in the West is now 2-3 months longer than normal and fires burn hotter than ever.  Warm temperatures and less rain over the plains produces droughts and impacts food production.  Cities have become “urban heat islands”, and can be up to 9o F hotter than the surrounding suburbs; coastal regions are experiencing more and more “sunny day flooding” as the height of high tides increases with sea level rise.  Annapolis, Baltimore and Washington DC are all facing increasing flooding from both storms and sea level rise within the next decades.  Warm air temperatures worsen the impacts of air pollution, which already claims as many lives in the US as car accidents.  Climate change has other serious impacts on health:  heat stroke is increasing, new diseases are appearing as the climate in the US warms enough to be suitable for disease vectors like mosquitos, food safety is compromised in warm weather and floods.  The list is long, and you can learn more here.

What can we do?   The best solution is to have a unified set of federal policies aimed at reducing US emissions from power plants and the transportation sector.  This is unlikely for at least the next few years.  However, states and cities remain steadfast in their determination to combat climate change, and even the nation’s largest companies are advocating for strong climate policies and becoming more sustainable in their own practices, as covered in virtually every major news outlet.  Individual actions can also make a big difference—you can be models for your friends and neighbors by increasing the sustainability of your home and landscape.  Simple changes in what you eat, how you use your car, the temperatures at you keep your home, the way you garden and landscape can make a big difference, and these changes do not require privation or being uncomfortable.  Read how here and here.

Church-PTO Collaboration for a New Pollinator Garden/Outdoor Classroom at a...